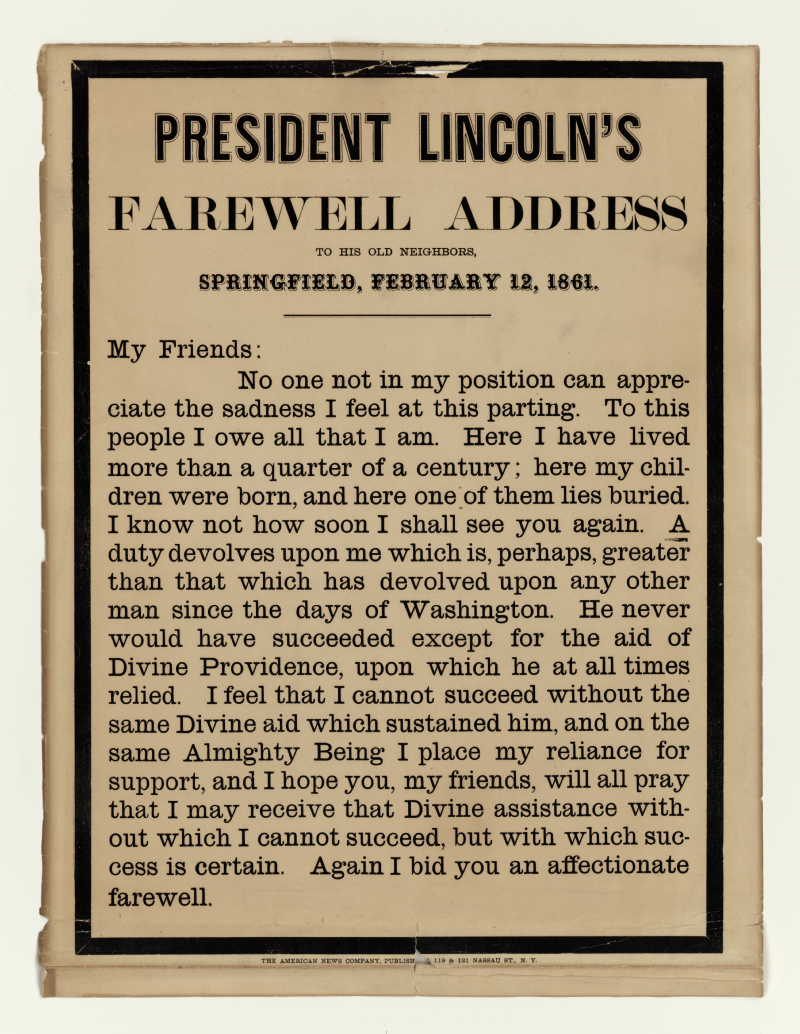 Above is the typed version of Abraham Lincoln's Farewell Address to the people of Springfield, IL, as published by the American News Company.

Since Lincoln's impromptu oral address was not transcribed at the time it was spoken, we will never know exactly what Lincoln said. However, several people who witnessed the speech, wrote what they recalled. One version is printed above.

No one who has never been placed in a like position, can
understand my feelings at this hour, nor the oppressive sadness
I feel at this parting. For more than a quarter of a century I have
lived among you, and during all that time I have received nothing
but kindness at your hands. Here I have lived from my youth
until now I am an old man. Here the most sacred ties of earth
were assumed; here all my children were born; and here one of
them lies buried. To you, dear friends, I owe all that I have, all
that I am. All the strange, chequered past seems to crowd now
upon my mind. To-day I leave you; I go to assume a task more
difficult than that which devolved upon General Washington.
Unless the great God who assisted him, shall be with and aid
me, I shall not fail, I shall succeed. Let us all pray that the God of
our fathers may not forsake us now. To him I commend you all --
permit me to ask that with equal security and faith, you all will
invoke His wisdom and guidance for me. With these few words I
must leave you -- for how long I know not. Friends, one and all, I
must now bid you an affectionate farewell.

Lincoln's Farewell Address was interrupted by calls from the crows of, “We
will pray for you.”

Contrast the above Illinois State Journal account with the official version below, which President-elect Lincoln wrote after his train pulled away from the
Springfield station. The original manuscript at the Library of Congress shows the first part of the pencil-written remarks are in Lincoln's handwriting; the remainder is in the handwriting of John Nicolay, his secretary, who took down what Lincoln dictated. The effects of the moving train are easy to see in Nicolay’s distorted letters.

My friends -- No one, not in my situation, can appreciate my
feeling of sadness at this parting. To this place, and the
kindness of these people, I owe every thing. Here I have lived a
quarter of a century, and have passed from a young to an old
man. Here my children have been born, and one is buried. I now
leave, not knowing when, or whether ever, I may return, with a
task before me greater than that which rested upon Washington.
Without the assistance of the Divine Being who ever attended
him, I cannot succeed. With that assistance I cannot fail.
Trusting in Him who can go with me, and remain with you and be
every where for good, let us confidently hope that all will yet be
well. To His care commending you, as I hope in your prayers you
will commend me, I bid you an affectionate farewell.

As both an author and an orator, Lincoln knew the written words
needed to be different. He wrote for a different audience than the
friends and neighbors who came out to see him off to Washington,
D.C. As a speaker, Lincoln formed a connection to the audience,
which is reflected in people’s calls to him.

As a writer, Lincoln compressed his words into concise memorable phrases, such as when he describes his life in Springfield. The written version is less emotional — sadness replaced oppressive sadness. It is more optimistic — I cannot fail replaced I will I shall not fail. And it is both less personal and more emphatic — not knowing when, or whether I may return for — I must leave you – for how long I know not.