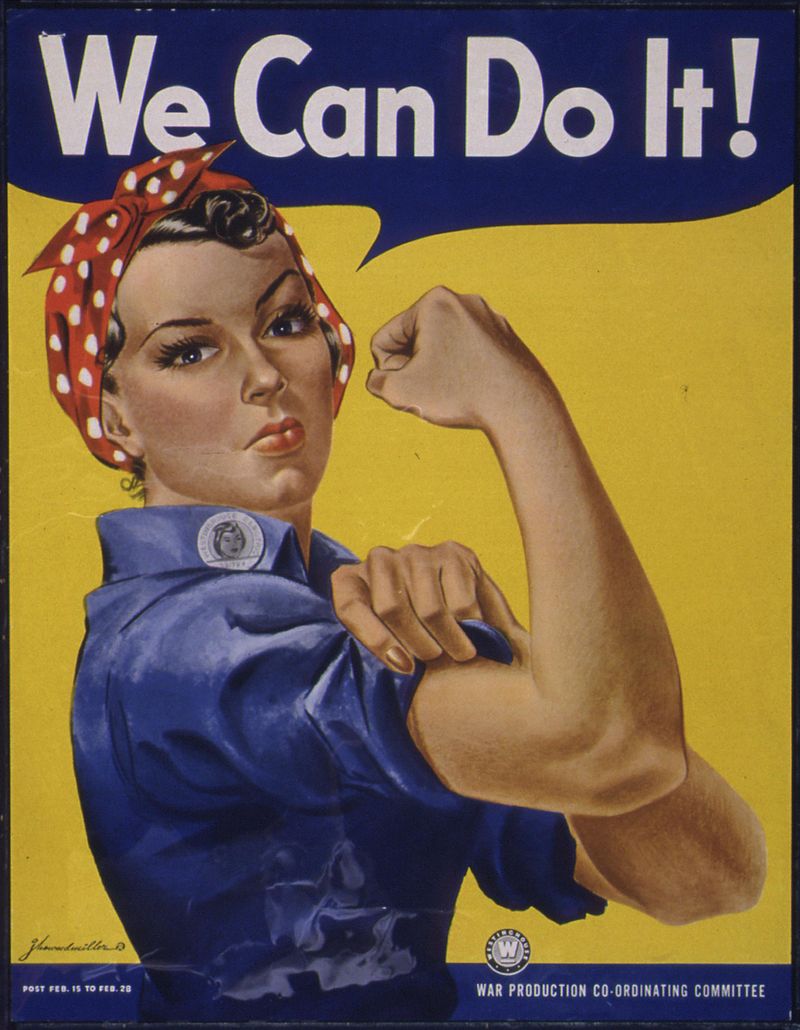 One of Rosie’s most famous appearances is the cover image of the May 29, 1943 edition of the Saturday Evening Post created by artist Norman Rockwell, showing Rosie with an American flag behind her and a copy of Hitler’s Mein Kampf under her feet.

Changes in Women's Fashion During WWII

From 1941-1945, nearly one in every three American men left home to serve in some WWII military capacity. Women in huge numbers were forced to enter the workplace to keep the economy running and supply civilian and military needs.

Fashion changed to emphasize function and safety over aesthetics and traditionally feminine style. Women's fashion during WWII took on a militarized look that resembled the U.S. military uniforms. Blouses and jackets now had shoulder pads and women's hats resembled Army berets. High-heels were out.

In the above news bulletin, women were encouraged to wear their hair up and tightly covered, and not to wear jewelry or clothing with cuffs. Hair was worn pinned up and back to avoid getting caught in machinery. Clothing now had fewer adornments. For the first time, khaki jackets and blue jeans became very popular among women.

This poster shows Rosie the Riveter, a fictional cultural icon popularized by the War Production Board during WWII to encourage women to enter wartime service in factories and shipyards. As can be seen by Rosie's outfit, slacks and headscarves became stylish for American women to wear.

Aside from function, women's dress also changed due to rationing of wool and silk that was needed for military uniforms and parachutes. Women's clothing during WWII was largely made from manufactured fibers such as rayon and viscose. When nylon use was restricted, stocking use declined. Fabric was also conserved by shortening skirts.

By 1945 an estimated over 6 million American women had joined the workforce. 25% of married women worked outside the home. Aside from making a major contribution to the war effort, these women left a lasting impact on the fashion world.

In September of 1940, President Franklin D. Roosevelt signed the Selective Training and Service Act (STSA), launching the first peacetime draft in American history. The STSA required all men between the ages of 18 to 64, an estimated 49 million, to register with the Selective Service System, from which 10 million were drafted. The WWII draft lasted until 1946. Additionally, some registered men who were not drafted volunteered to fight overseas. With a large portion of the male working population serving in military roles, women were forced to enter the workforce in massive numbers, both to support their families and the war effort.

Massive resources were required for the WWII effort. President Roosevelt decided that the U.S. would provide military forces in both the European and Pacific theaters, and America would serve as the “arsenal of democracy,” producing the weapons necessary to arm the Allied Powers. Just a few months after America’s entry into WWII, FDR created the War Manpower Commission to ensure there would be enough workers for the war effort in the agricultural, industrial, and military sectors.