This draft letter was written by then Vice President Richard Nixon four days before the 1960 presidential election. The handwritten notes are also Nixon's. Jackie Robinson had worked for Democratic Minnesota Senator Hubert Humphrey who had been eliminated in the primaries. Now Robinson, an independent, was deciding who to support. Robinson chose to support Richard Nixon, who he viewed as having a more promising civil rights record than JFK, a position he came to reevaluate.

Robinson announced his support for Richard Nixon in the 1960 Presidential election and stated that JFK claimed to support civil rights while also courting racist southern voters. ﻿Bobby Kennedy retaliated by accusing Jackie of being anti-union. In this letter Jackie Robinson praises JFK for taking steps in the right direction yet notes that much more must be done to advance civil rights. 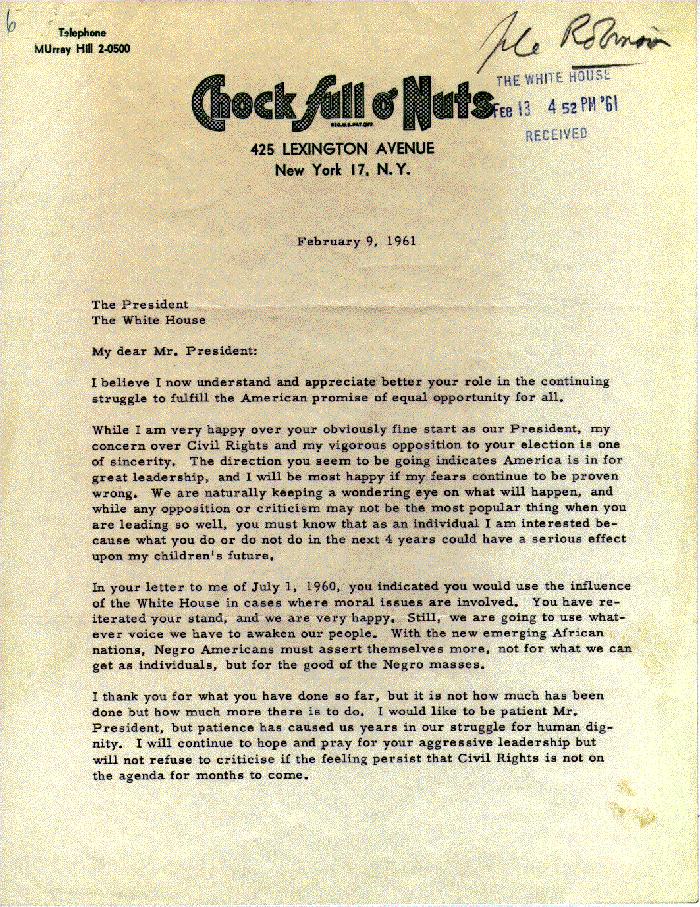 Jackie Robinson wrote this telegram to the president three days after the assassination of Medgar Evers in Mississippi, urging him to protect Martin Luther King, Jr.  Evers, an influential Civil Rights activist who fought for equal rights and against segregation, was assassinated by a white supremacist and klansman in Jackson Mississippi on June 12th, 1963. Following his assignation, an estimated 5,000 people marched in a funeral procession in Jackson including MLK. and other key figures in the Civil Rights movement. In this telegram, Jackie Robinson urges President Kennedy to do everything in his power to protect M.L.K. during this dangerous time. 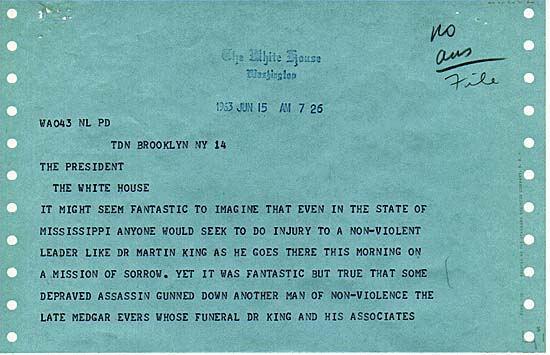 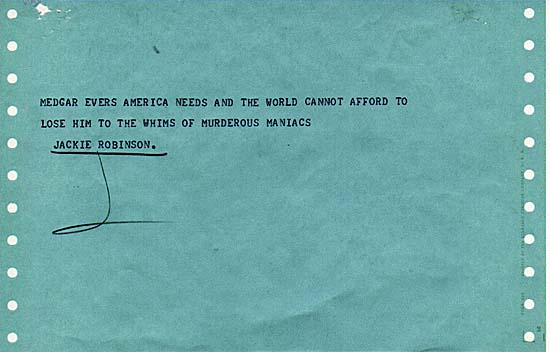 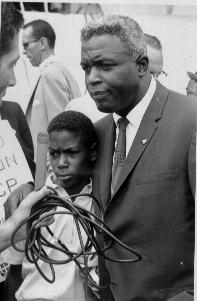 On March 7, 1965, an estimated 525 to 600 civil rights marchers marched in Selma, Alabama in a Civil Rights protest. They were met with state troopers who began shoving the activists and knocking them to the ground and beating them with nightsticks. Other troopers fired teargas while still others charged the crowd on horseback. Horrifying images were televised to audiences worldwide and left the nation stunned. 17 marchers were hospitalized and 50 treated for lesser injuries. The day soon became known as "Bloody Sunday." Jackie Robinson was horrified, like so many around the world were, and urged President Johnson to take immediate action in this telegram dated just two days after Bloody Sunday. 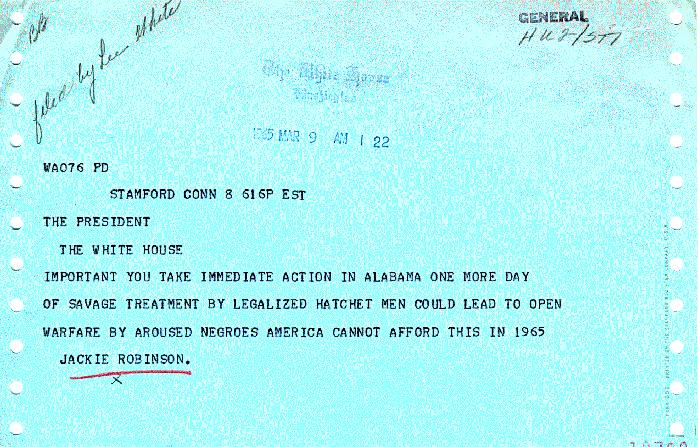 Life is not a spectator sport. . . . If you're going to spend your whole life in the grandstand just watching what goes on, in my opinion you're wasting your life.

I believe in the goodness of a free society. And I believe that society can remain good only as long as we are willing to fight for it--and to fight against whatever imperfections may exist.

Baseball was just a part of my life. Thank God that I didn't allow a sport or a business or any part of my life to dominate me completely. . . . I felt that I had my time in athletics and that was it.

The right of every American to first-class citizenship is the most important issue of our time.

I don't think that I or any other Negro, as an American citizen, should have to ask for anything that is rightfully his. We are demanding that we just be given the things that are rightfully ours and that we're not looking for anything else.

I guess you'd call me an independent, since I've never identified myself with one party or another in politics. . . . I always decide my vote by taking as careful a look as I can at the actual candidates and issues themselves, no matter what the party label.

Civil rights is not by any means the only issue that concerns me--nor, I think any other Negro. As Americans, we have as much at stake in this country as anyone else. But since effective participation in a democracy is based upon enjoyment of basic freedoms that everyone else takes for granted, we need make no apologies for being especially interested in catching up on civil rights.

I won't 'have it made' until the most underprivileged Negro in Mississippi can live in equal dignity with anyone else in America.

It is up to us in the north to provide aid and support to those who are actually bearing the brunt of the fight for equality down south. America has its iron curtain too.

Negroes aren't seeking anything which is not good for the nation as well as ourselves. In order for America to be 100 per cent strong--economically, defensively, and morally--we cannot afford the waste of having second-and-third class citizens.