There are ten known copies of Mary Katherine Goddard's printing of the Declaration of Independence, known as the Goddard Broadside, still in existence. Look closely at the bottom of the image below to see Mary Katherine Goddard's name as the printer. Although she usually printed her name as "MK Goddard", she recognized the importance of the opportunity and included her full name on the broadside. 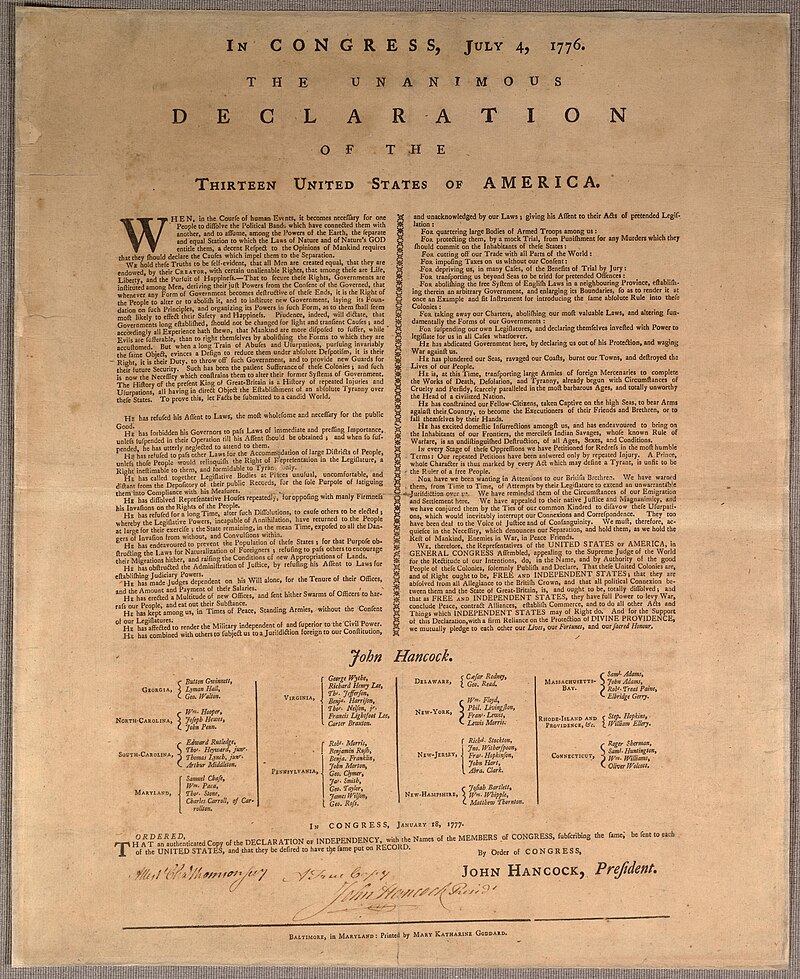 The location of Mary Katherine Goddard's Baltimore print shop is 125 E. Baltimore Street in Baltimore, Maryland. The location of the Continental Congress in Boston, which met in the Henry Fite House, is now the Royal Farms Arena.

When Benjamin Franklin was appointed as the first Postmaster General under the Continental Congress in 1775, he already had significant experience in the postal service. He had served as postmaster of Philadelphia from 1737, and joint Postmaster General of the colonies from 1753 to 1774 under the Crown Post. While postmaster, Franklin made several innovations: he created a standardized rate chart for mail delivery based on weight and distance, instituted overnight postal travel between New York and Philadelphia, and

Samuel Osgood served as the fourth Postmaster General of the United States, and the first under the new U.S. Constitution. During his time as Postmaster General, he lived in New York City and allowed President and Lady Washington to live with him in his opulent house (the term “First Lady” was not coined until the mid-nineteenth century). Osgood held this position from 1789 until 1791, when the national government moved from New York City to Philadelphia for ten years before settling in Washington, D.C. Osgood would later be elected as the first president of the newly formed City Bank of New York, which later became Citibank, and then today’s Citigroup.

In February 1792, President George Washington signed the Postal Service Act, officially establishing the U.S. Post Office Department. In addition to establishing the Post Office, the Postal Service Act set in place mail subsidies to promote the distribution of newspapers, considered crucial to an informed electorate and the promotion of the right to free press. The subsidies allowed for newspapers could be sent to subscribers for only 1 penny up to 100 miles away from the publisher and 1.5 cents over 100 miles, while regular letters cost between 6 and 25 cents. These subsidized prices cost the new U.S. government roughly 0.2% of the Gross Domestic Product. The Postal Service Act had far reaching consequences, spurring economic growth, raising literacy rates, connecting distant communities, and allowing for the newfound freedom of press to be implemented.

While serving as Postmaster, Mary and her brother parted ways. In 1784, William’s name replaced Mary Katherine’s on their printer’s emblem. William ran the newspaper while Mary continued as a publisher, bookseller, and Postmaster. Later that year, William and Mary published rival almanacs, and William attacked both Mary’s almanac and her character. Mary then sold her share in the Maryland Journal to her brother.